Visiting castles in the Piacenza hills 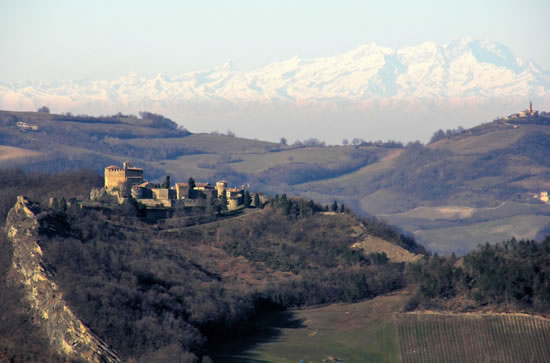 The Val Tidone is the outermost of Piacenza’s valleys and has always been used as a passageway and a battleground. This explains the presence of castles and strongholds here since far-off times. Some of them are open to the public but others are still lived in.

Starting off from Ziano Piacentino, you can visit several castles, but it is advisable to find out about opening times beforehand.

Castello di Corticelli is in the municipality of Nibbiano, on the right as you drive along the 412 state road towards Monte Penice. The little fortress has belonged to the Arcelli Counts for centuries and it is first mentioned in 1028. Originally it may have been made up of just two towers (now the layout is quadrangular) surrounded by a moat and walls that enclosed an oratory and several rural houses within, which are built in stone and still standing.

In Pianello Val Tidone you can visit Rocca d’Olgisio. It is set in the rock and presides over the valley of the Tidone and Chiarone torrents. It is one of the oldest and most striking strongholds in the Piacenza area, surrounded by 6 rows of walls. It was built in the eleventh century and, after several owners, it changed hands in 1378 from Gian Galeazzo Visconti to Jacopo Dal Verme, the valorous winner of the Battle of Alessandria against the Florentines. The fortress, where you can stay the night, has an irregular layout with an entrance only on the northern side through a charming, steep street. The keep consists of various communicating rooms terminating in a small sixteenth-century loggia.

The town halls of Borgonovo Val Tidone and Pianello Val Tidone are housed in old fortresses in large and welcoming squares.
These hills are dotted with other castles that are not open to the public: along the 412 state road, between Borgonovo and Pianello Val Tidone you can see Castenuovo castle on your right, if you head off the road into the countryside you’ll find Seminò castle, while the seventeenth-century Montalbo residence was built from a pre-existing thirteenth-century castle. In Val Luretta you can catch a glimpse of the Boffalora, Bastardina, Rezzanello and Momeliano castles.

Moving further into Val Luretta you can visit the castle and fortress of Agazzano. It was first built in the 1200s for purely military purposes (round corner towers, drawbridge, keep with ravelin) with a beautiful loggia added by Luigia Gonzaga. Next to the fortress there is an eighteenth-century villa that was originally the village of the fortress. The contrast between the two buildings that make up this beautiful architectural complex adds to its charm. The walls of the large rooms of the villa are beautifully decorated with distemper and furnished with fittings from the seventeenth to the nineteenth centuries. Particularly noteworthy are the beautiful ceramics and porcelain. Also the French-style garden, with its statues and fountains, is from the end of the eighteenth century; Luigi Villoresi, director of the park of the Royal Villa in Monza, assisted in its design.

Continuing towards the Val Trebbia you mustn’t miss a trip to the Castle and village of Rivalta. It is mentioned in documents as early as 1048 and in the fourteenth century it passed into the hands of the Landi family, who still own it today with the branch of the Zanardi Landi counts. It is a sumptuous noble residence surrounded by a magnificent park and among its frequent visitors there are members of the English Royal family. It stands out for the unmistakable and unique profile of its turret. The large reception room, dining room, kitchen, cellars, prisons, bedrooms, tower, armoury, gallery, billiard room and museum of military costumes are all open to the public. The castle also has 12 luxury rooms in the village if you want to stay the night.