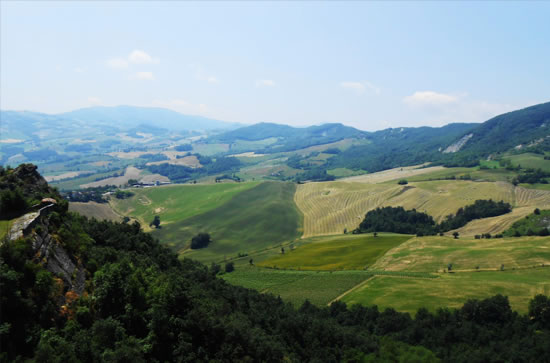 The Val Tidone occupies the western most part of the hills of Piacenza and is historically a border area. This feature, together with the beauty and wealth of nature to be found here, has given the area important traditions dating back to prehistoric times, as well as signs of the different cultures that have settled in these lands.

The Val Tidone is a hilly area, rich in castles and fortified houses that have been revalued today and are inhabited once more due to expert renovation. The area is hilly and rich in vineyards, where the best-known and valued Colli Piacentini wines are produced. But you can also find extremely varied landscapes here: open and sunny, mountainous, woods, fields, meadows and badlands.

The main town in the Val Tidone area is Castel San Giovanni, but we would like you to discover the smaller villages and those little gems that are hidden in the folds of the hills of Piacenza, far from the eyes of the people just passing through this splendid land.

Going through Borgonovo Val Tidone you get to Ziano Piacentino which was of strategic importance in the middle ages, as shown by the presence of numerous castles. Among them is the one in Ziano, mentioned in a document from 1029; today only part of the wall remains, together with the constructions in stone which were once set against it. The nearby Seminò castle is still intact, while the seventeenth century residence of Montalbo was built from the pre-existing thirteenth century castle. In Vicomarino, Costiola, Vicobarone and Luzzano there are the remains of previous fortified structures.

Pianello, a well-known holiday resort, was already inhabited in Roman times: the finds that have emerged in the surrounding countryside are kept in the Archaeological Museum set up in part of the castle, built by Jacopo dal Verme in the 1300s and currently the town hall. 6 km from Pianello the Rocca d’Olgisio is perched on a rocky spur between the Tidone and Chiarone torrents. It is an architectural complex where the features of the defensive structure and stately residence are harmoniously blended.

If you continue along the 412 A road you get to Nibbiano, home of the Upper Val Tidone mountain community with its charmingly renovated historical centre, where you can still see signs of the castle mentioned in a document from 1029. From here you can get to Caminata (3 km), a small fortified village that seems to get its name from the secret narrow walkways that go through it. Parts of these secret passages are still visible together with the towers, stone dwellings and ancient medieval shops.

At the extreme end of the Val Tidone is Cicogni, about 17 km from Nibbiano, which is surrounded by woods and an imposing nature that make it a select summer resort.